What is Ozone Layer Depletion? 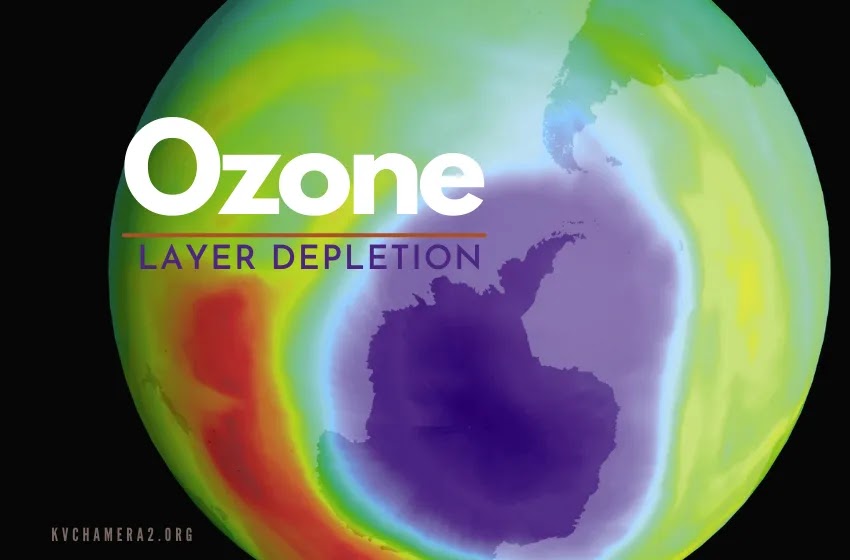 Ozone depletion is the diminishment of the ozone layer located in the stratosphere, about 20 kilometers above the Earth. This layer is created by ozone molecules made from oxygen atoms, and they absorb most of the sun’s harmful ultraviolet radiation.

Harmful radiation is not absorbed by the ozone layer and therefore does not affect the Earth. Depletion of the ozone layer is a complex process that can be divided into two types: natural and anthropogenic.

Ozone is a gas in the earth’s stratosphere that absorbs ultraviolet (UV) radiation from the sun. As a result, ozone protects life on Earth from overexposure to UV radiation.

The ozone layer protects the earth from about 99% of the sun’s harmful UV radiation. Ozone depletion occurs when certain chemicals in man-made products, such as chlorofluorocarbons (CFCs), release chlorine and bromine ions into the stratosphere.

What does the Ozone Layer do?

The key effect of the presence of the ozone layer is that it filters the ultraviolet radiation that comes from the sun, especially the type known as UV-B. While some radiation is important, too much can be extremely damaging to the environment.

In particular, it can damage the DNA in living organisms. This means that it can cause cancer in both humans and animals.

The direct implications of increased cancer rates on the human population is obvious, but there are also other Environmental issues associated with this. The increased cancer death of other animals is disruptive to food chains and damaging to ecosystems.

The Effect on The World

The effect of Ozone Layer Depletion often seems as if it is a faraway problem, given that the actual holes in this protective blanket over the Earth’s atmosphere are concentrated around the poles and far from most human settlements.

In reality, the weakening of the Earth’s protection from radiation has implications that spread across the planet. The Environmental issues caused by ozone layer depletion will ultimately affect everyone.

It has been reported by scientists, that an ozone hole five times the size of California has opened over the Arctic this spring, matching the ozone loss over Antarctica for the first time on record.

Part of the problem that the public is having, coming to grips with the importance of climate change, is the fact that it is often presented in a way that creates the impression that the impact is limited to people either on the far side of the planet or far into our future.

Meanwhile, greenhouse gases and the depletion of the ozone layer are causing worldwide shifts in the climate. In reality, the Ozone Layer Depletion changes are impacting the lives of people all over the world right now.

It is changing our planet

Some of the most notable Effects of Climate Change in the life of the average person is its effect on the price of food and the supply of drinking water.

The Intergovernmental Panel on Climate Change, or IPCC, reports that the number of areas that suffer from serious droughts has increased since the 1970s.

These droughts make it more difficult for people in the region to get enough water to meet their needs.

In addition, when droughts occur around land used for farming, it affects food production. Due to the global nature of the modern food system, a drought in one key area can potentially affect food prices throughout the world.

In addition to its effects on animals, increased ultraviolet light will also have implications for plant life.

Some plants may behave differently because their life cycle and ability to create ripe fruit is affected by the presence of ultraviolet light. The microscopic plant life in the oceans, on the other hand, may not be able to survive the increased exposure.

There are other, more immediately dramatic, effects of climate change. For example, the IPCC also reports that tropical cyclone activity in the North Atlantic has become more intense since 1970.

Homes and businesses that were built to weather the type of storms that were commonly seen several decades ago are now increasingly being subjected to more intense ones.

In some cases, the structures simply cannot hold up and their failure results in expensive damage and loss of human life.

The unpredictable nature of these storms makes it difficult to determine where and when it is worthwhile to make expensive upgrades to increase the chances that a building can withstand them.

Scientists also expect that Ozone Layer Depletion will cause Environmental issues by disrupting the climate.

The additional radiation is likely to have an impact on wind currents in the upper atmosphere. While this may seem minor, any change to the way air moves in the atmosphere can have major effects over time.

It affects temperatures by moving air from one part of the world to another, and can also have major impacts on the amount of rain that reaches an area by changing the direction that moist air moves.

The Environmental issues that may result from ozone layer depletion are both varied and potentially severe. Without serious and focused action, these changes are a reality that humanity will be forced to deal with.

Environmental problems caused by depletion of the ozone layer will eventually affect everyone.

Ozone depletion often seems to be a distant problem, considering that the actual holes in this protective layer over the earth’s atmosphere are concentrated in poles and far from most human settlements.

In fact, the reduction of Earth’s radiation exposure has far-reaching effects worldwide.

The ozone layer is a filter

The main effect of the ozone layer is that it filters ultraviolet rays from the sun, particularly UV-B. Although some radiation is important, too much of it can harm the environment.

In particular, it can damage DNA in living things. This means it can cause cancer in humans and animals. The direct effects of an increase in cancer rates in humans are obvious, but there are other environmental issues related to this.

The increase in cancer deaths in some animals disrupts food chains and harms the environment.

In addition, the environmental issues and its effects on animals, increased ultraviolet light will also have implications for plant life.

Some plants may behave differently because their life cycle and ability to create ripe fruit is affected by the presence of ultraviolet light. The microscopic plant life in the oceans, on the other hand, may not be able to survive the increased exposure.

Scientists also expect that the Ozone Layer Depletion will cause Environmental issues by disrupting the climate.

The additional radiation is likely to have an impact on wind currents in the upper atmosphere. While this may seem minor, any change to the way air moves in the atmosphere can have major effects over time.

It affects temperatures by moving air from one part of the world to another, and can also have major impacts on the amount of rain that reaches an area by changing the direction that moist air moves.

Whose Problems are these Environmental Issues?

The problems associated with the cleanup of the environmental pollution is not the responsibility of one nation or group of nations.

Until the world comes together to put forward a comprehensive plan to tackle the effects of global warming, we will continue to see the degradation of the ozone layer, wild weather patterns and a continued risk to human life. Now is the time to take action, not when it’s too late.

The Environmental issues that may result from Ozone Layer Depletion are both varied and potentially severe, and without serious and focused action, these changes are a reality that humanity will be forced to deal with.

A Cause of Concern and International Cooperation

The Earth is protected from harmful radiation from the sun by layers of gasses that comprise its atmosphere.

The second layer of the atmosphere is the stratosphere or ozone layer, which is mainly made up of triatomic oxygen molecules known as ozone molecules or ozone gas. Ozone Layer Depletion refers to the decrease in the volume of ozone in the stratosphere.

This phenomenon was observed since the late ‘70s and an international treaty has already been ratified by 196 nations in an attempt to stop further damage of the ozone layer.

Increased surface UVB results in an increase in ground level ozone too which is toxic to humans. Increased UVB however will have a favorable effect on people who are deficient in vitamin D since increased UVB causes the body to produce more vitamin D thereby correcting any deficiency if any.

The increase in UV radiation caused by Ozone Layer Depletion also affects the production of basic crops like rice. Rice plants rely on the cyanobacteria found in their roots, which are vital for nitrogen retention.

Cyanobacteria are very sensitive to UV light and therefore an increase in surface UVB will harm them causing a decrease in rice production.

The harm and worse scenarios that may occur if Ozone Layer Depletion continues at an alarming rate are serious.

The support and cooperation that nations have shown in implementing the international treaty that bans the production of ozone depleting substances is one big step to save our dear Mother Earth from further destruction.

What Can We do about Ozone Layer Depletion?

Just as the entire world shares in the production of gasses that are causing climate change, the Ozone Layer Depletion problem also extends to everyone.

It is important that everyone does their part both by making changes in their personal lives and by lobbying their governments to take concrete action.

It is the only way to both limit the damage being done to the environment and prepare for those changes in climate that it is too late to prevent.

Below are some frequently asked questions about Ozone Layer Depletion and its effects that you may find helpful: –

Q1. Why is damage to ozone layer a cause for concern?

Ans. The ozone layer in the atmosphere shields living creatures on the planet from the harmful effects of the sun’s radiation. But chemicals (mostly gases such as chlorofluorocarbons) used as refrigerants and solvents have damaged the ozone layer, exposing living creatures to the harmful effects of the sun’s radiation. This has caused a rise in skin cancers, reductions in animal populations and crop yields, and other problems.

Q2. What is the harm from the depletion of Earth’s ozone layer?

Q3. How does ozone layer protect us from harmful effects in the environment?

Ans. The ozone layer is a layer in the Earth’s atmosphere that absorbs most of the Sun’s ultraviolet (UV) radiation. As human beings, our skin is exposed to harmful effects of the UV rays that are emitted from the sun. The ozone layer helps to protect us by absorbing these rays before they can reach our skin.

Q4. What is ozone layer and its importance?

Ans. The ozone layer, also known as the ozone shield, is a region of Earth’s stratosphere that contains relatively high concentrations of ozone (O3). The ozone layer contains less than 10 parts per million (ppm) of ozone and is situated in the upper portion of Earth’s atmosphere, from approximately 15–35 km above sea level. The ozone layer plays an important role in absorbing ultraviolet radiation that can be potentially harmful to living organisms and is thus often referred to as the “ozone shield”. The ozone layer has significantly depleted over the past century due to the use of chlorofluorocarbons or CFC.