The political theories socialism and communism have distinct qualities, yet they share similar foundations.

The general idea for both systems is a belief in public ownership of production, which will lead to beneficial gains for all.

Both theories are offered as alternatives for a completely capitalistic society, which is seen as exploiting the working class. 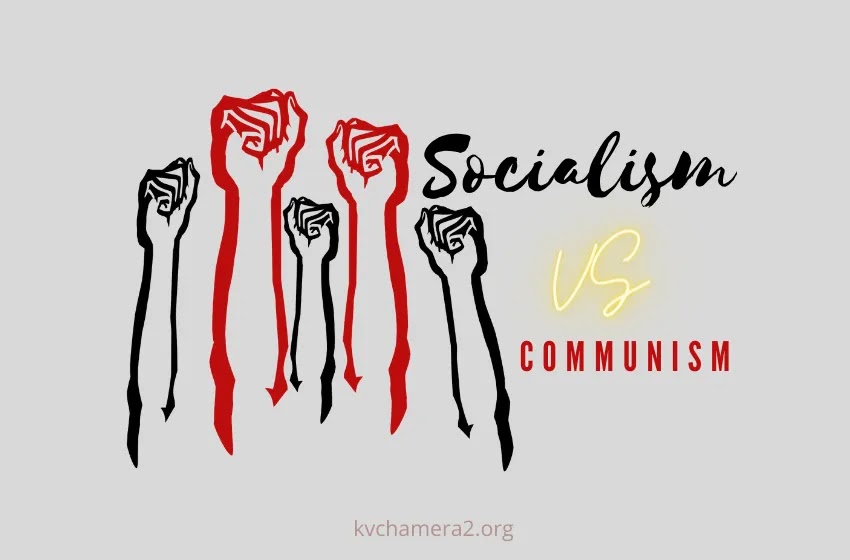 One of the most famous philosophies pertaining to political regimes came from Ancient Greece: Plato’s Republic.

In it, Socrates proposes a society in which highly trained leaders are effective at eliminating the common ailments of society, such as poverty, by fair distribution.

Furthermore, in this ideal city private property and social classes are abolished.

Both socialism and communism share a similar ideology in which equal distribution of goods will rid society of all its negativities.

Another main facet of both systems is equality and fairness for all. This was a common theme in Sir Thomas More’s ideological novel Utopia.

Though the book itself was a work of fiction, it displayed More’s philosophies on a perfect socio-economic system.

The fictional island in the novel functioned harmoniously in all aspects of civilization-legally, politically, economically and most importantly, socially.

The dual concepts of socialism and communism are rooted in this utopian ideal of a harmonious governing system.

Difference Between Socialism and Communism

From the mid-1800s until the mid-1900s, socialism and communism were the dominant ideas of social and economic organization in much of western Europe and parts of Asia.

Socialism and communism were also seen as the wave of the future and movements for change and reform in many other countries.

Socialism is the political theory of how an economy should be organized to promote equality and enable people to be free.

It involves joint control of the economy by everyone rather than by a small number of rich people.

Thus, under socialism, the entire economy is controlled by the workers (through worker cooperatives or by the state) rather than by private individuals.

Socialism also means that the main purpose of the economy is to provide for social needs (health, education, housing, etc.)

It is an economic system that advocates or promotes the vesting of the ownership and control of the means of production and distribution, of capital, land, goods, and natural resources, in the community as a whole.

Socialism is based on social ownership of the means of production, combined with economic planning and democratic management of the economy.

It is distinguished from the many varieties of state-ownership by advocating full public ownership of capital, land, natural resources and enterprises at the expense of individual or party ownership.

This is the only way to ensure that the fruits of our labor go to bettering our lives and our communities, instead of the profits of a few owners or shareholders.

A communism is a way of organizing society in which the economy is collectively and democratically owned and controlled by all of the people who work in it.

This means that instead of a small group of wealthy individuals and corporations owning and controlling the industries, resources, and profits which are created by the labor of millions of people, the workers themselves collectively and democratically control the economy.

It is a philosophy of government in which all property is owned by the people, not individuals. The economy is run in a way that benefits everyone, instead of a small group of people.

In a communist system, there is no government, only the shared government of everyone in the community.

While socialism and Communism were very similar in many ways, they had some important differences between them…

The Difference Between Socialism and Communism theories within the context of economic and political theory are highlighted in below. 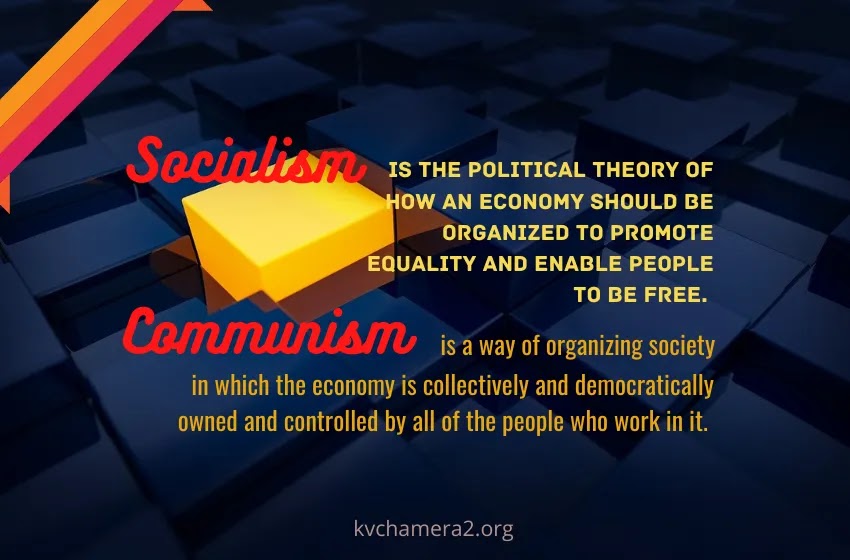 Socialism & Communism as a Theory

One of the most famous philosophies pertaining to political regimes came from Ancient Greece: Plato’s Republic.

In it, Socrates proposes a society in which highly trained leaders are effective at eliminating the common ailments of society, such as poverty, by fair distribution.

Furthermore, in this ideal city private property and social classes are abolished.

Both socialism and communism share a similar ideology in which equal distribution of goods will rid society of all its negativities.

Another main facet of both systems is equality and fairness for all. This was a common theme in Sir Thomas More’s ideological novel Utopia.

Though the book itself was a work of fiction, it displayed More’s philosophies on a perfect socio-economic system.

The fictional island in the novel functioned harmoniously in all aspects of civilization-legally, politically, economically and most importantly, socially.

The dual concepts of socialism and communism are rooted in this utopian ideal of a harmonious governing system.

Finally, a modern, more famous political theorist generally associated with the popularity of both philosophies is Karl Marx.

To this day, the book is infamous for popularizing socialist and communist doctrine as it discussed the woes of the working class within a capitalistic society.

Furthermore, the manuscript predicted that these grievances would be fixed by an overthrow of capitalist government by the people.

Government would then transition into a socialist society and finally become a communist society. Therefore, as a political theory, communism is a more extreme form of socialism.

Objectives of Socialism and Communism

Overall, both theories are against the ailments produced by a capitalistic society.

The main argument against capitalism is that the working-class labors so the upper class can make most of the gains without devoting much of the labor.

This creates an imbalance in society and forms an unfair system that only benefits the few.

Many argue that this simply creates new “nobility”. Capitalism favors the ownership of private property and those who own property, such as factories, have the option of passing on their wealth and business to their offspring.

Meanwhile, the workers within these factories are always in competition with each other and end up working for subsistence wages.

Socialism and communism were constructed to counteract this unfair political model of capitalism.

As theories, they were produced with the working class in mind. The objective was to provide workers with more power.

At the time of the rise of capitalism (during the Industrial Revolution in Europe), workers had no rights as an organization.

Since the notion of a working class was completely new, there was no organization, even amongst the workers themselves.

No unionized groups (known today as “unions”) were recognized and therefore there were no negotiations conducted with employers.

In addition, any attempt by the workers to organize or rebel was quickly crushed. It was becoming apparent that employers held absolute power over employees, their wages and their working conditions.

Socialism and communism transferred power back to the workers by allowing them to equally and fairly distribute the wealth.

The workers would benefit since they could now fairly set their working conditions. This in turn would cause the entire country to benefit because workers would have more of an incentive to be productive.

Karl Marx and the Origins of Communism

Communism is a political ideology of the working class that aims to defend the working class against exploitation by the bourgeoisie, overthrow capitalism, and replace it with a system of common ownership of the means of production.

Karl Marx was an influential figure in the field of political philosophy, economics, sociology, and history.

He was well known for his criticisms of capitalism, arguing that it would inevitably cause conflict between the working class and the capitalist class. His influence on the 20th Century is well documented.

However, it was not until after his death that his theories would be implemented in the form of communism.

Karl Marx was born on May 5, 1818 to a middle class German Jewish family. His father was a lawyer and his mother was a Dutch woman. Karl Marx would later become one of the most important socialist thinkers of the 19th century, influencing the Communist Revolution in Russia`. He died in 1883.

Socialism and Communism in Practice

Socialism and Communism are two terms which have been used interchangeably in the past, but have developed differences in meaning.

The two terms have been applied to a variety of situations and have developed different meanings over time.

In general, both socialism and communism are political theories where the people own all of the factors of production, and the government is responsible for the wellbeing of the people.

Socialism and communism are both political ideologies that have been practiced in many countries throughout the world. However, the two terms are often used interchangeably, with little distinction between them.

This is exacerbated by the fact that a number of countries which have a history of communism, such as the Soviet Union and China, have adopted a socialist economic system, and vice versa.

In many ways, however, socialism and communism are actually quite different from each other.

Although Mikhail Gorbachev tried to save the Soviet Union by instilling an open policy government allowing more social, political and economic freedoms, the Soviet Union collapsed in the early 1990s and led to the fall of communism the world over.

The early 1990s saw a rapid wave of revolutions against oppressive Soviet influence. Since the U.S.S.R. was the principal communist model, all associations with communism were also eroded.

Communism as a theory is rigid and can’t be combined with any other ideologies. Socialism meanwhile, allows room to co-exist with more liberal political ideologies, such as democracy and capitalism.

Since the latter two ideologies are now dominant political platforms in the modern world, socialism is seeing a transition to social democracy, which is a hybrid of the two ideologies.