The division of cells takes place in either of the two ways, Mitosis or Meiosis. Mitosis and meiosis both occur in eukaryotic cells and involve the separations of the chromosomes. Both the process differs from each other and to know the facts associated with mitosis vs meiosis is very important but first of all one should know what these processes are.

It is the process of cell division in which division of nucleus and duplication of chromosomes takes place. The process of cytokinesis follows mitosis. In cytokinesis the cell membrane and the cytoplasm of the cells divide. This results in the formation of two daughter cells that are each having the same number of chromosomes as the parent cell and these are called diploid cells. Mitosis occurs in Somatic cells or Soma or Body cells.

Meiosis takes place in germ cells or the sex cells of the body. The process of meiosis results in the formation of four daughter cells which have half the number of chromosomes of the parent cells and hence are called as haploid cells.

Difference Between Mitosis and Meiosis 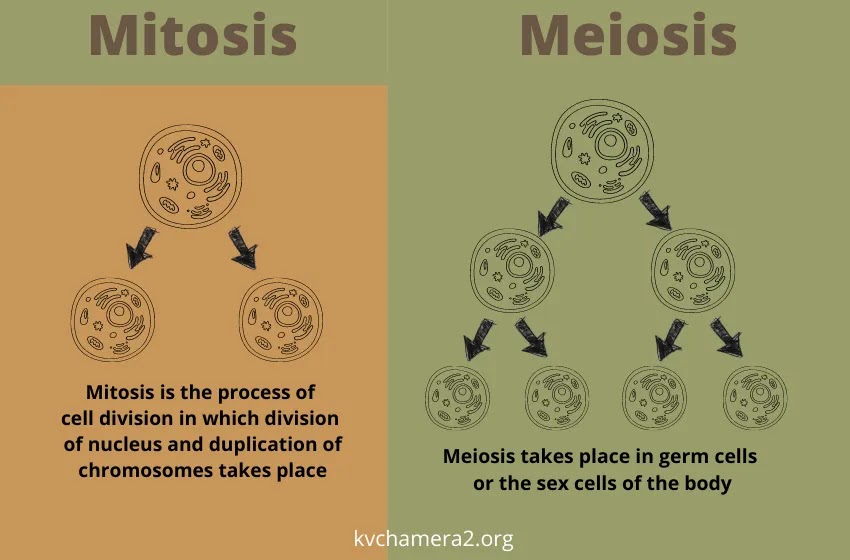 Mitosis and meiosis are the processes by which cells in living things divide to produce new cells. Mitosis is the division of a cell into two genetically identical daughter cells.

It is a kind of a division of nucleus. It is a division of production of two daughter cells which are identical. This method is done by eukaryotic cell. The similar method to mitosis is cytokinesis.

Eukaryotes are single celled as well as multi cellular organisms; mitosis is done in both of them for asexual reproduction. Most commonly it is seen in plants.

Many people have spider as well as airplane plants and mitosis are seen very commonly in these plants.

The steps of mitosis are:

Meiosis is a process where a diploid cell divides twice to create four haploid cells. This occurs during the production of reproductive cells such as sperm and egg cells.

Meiosis I is where one of the two copies of each chromosome is separated into different daughter cells, while Meiosis II is where the sister chromatids are separated.

When cells divide, they replicate their DNA before dividing in order to ensure the same genetic material in both daughter cells.

The major steps of meiosis are as follows:

Cell is the basic building block of any organism. All life forms on earth are made of cells. Some of them would be single celled organisms and some other would be multi-cellular organisms.

For example, most of the bacteria are single celled organisms and they rely on this single cell for all of their functions. Amoeba is another example of a single cell organism.

Multi-cellular organisms like human will have many cells and to us these cells will be more of functional parts rather than the entire life part.

Each of the cells is given different importance and they are prioritized based on their functions. There might be more than 100 trillion cells in a human body.

In ancient times when the human body was bulkier, the cell numbers rose very high and they had more than 1000 trillion cells.

Cell division is a simple process of divining a cell to produce two daughter nuclei. In a briefer term, it could be stated as the reproduction way for a cell.

As the cell gets old, it tends to divide itself into two to give smaller and younger daughter cells, which has to mature to the destined size. This is the main and in fact the only way for cells to replicate themselves. This division if signified with the cell size.

Cells are given a particular size to grow. They grow until that size holding and expanding together.

Cell division in the nucleus-lacking prokaryotic cells is taking place through a process of fission, also called a binary fission.

The cells simply divide themselves into two and keep multiplying as and when necessary. This process is a bit complicated in the eukaryotic cells.

Meiosis is the process of making gametes or sex cells. It is a form of cell division that occurs only in sexually reproducing organisms.